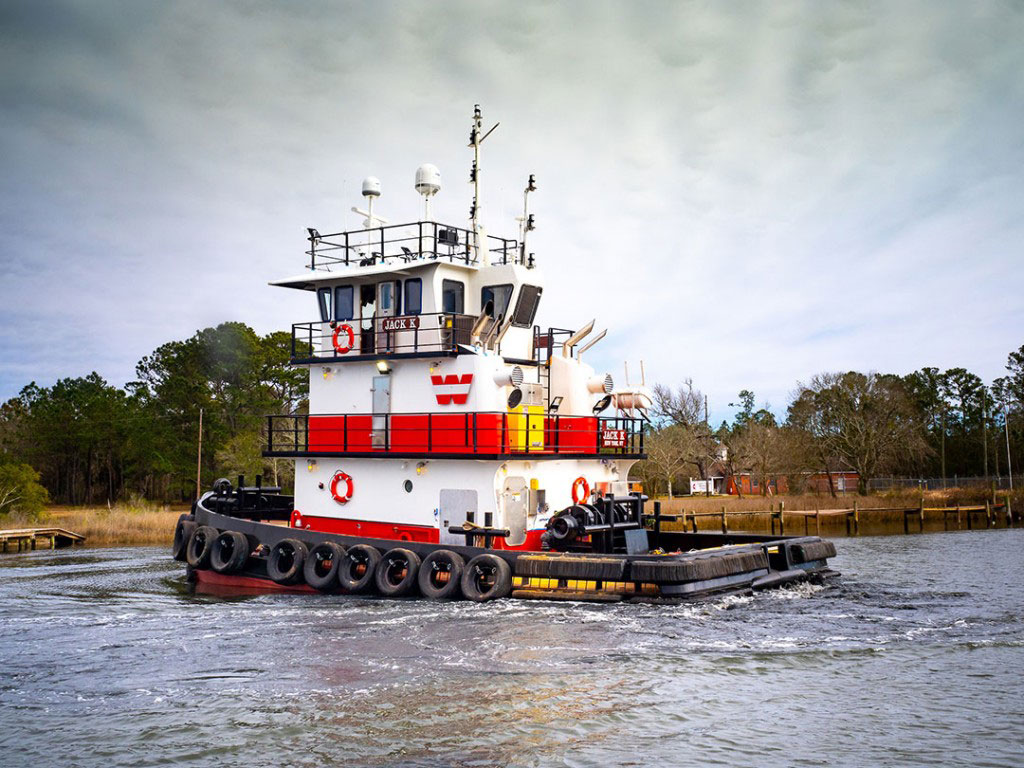 The versatile vessel was designed by MiNO Marine of Jefferson, La., and built by Rodriguez Shipbuilding in Bayou La Batre, Ala. Following a dormant period at the yard, owner Joey Rodriguez received multiple orders from three companies in the past year. The latest contract is with Weeks for two 62.5-foot dredge tenders and a triple-screw 78-footer.

Reduced boat and equipment maintenance was a priority for the owner. “We designed these boats to be rugged and to have a long career with Weeks,” said Shaun O’Brien, senior port engineer for towing and project manager for the newbuilds. To that end, the full length of Jack K.’s bottom plate is half-inch steel, as are the shear strakes. The deck plating is three-eighths of an inch thick as opposed to the more common five-sixteenths of an inch.

“It’s really nice having an all-Cummins package for lower maintenance and operating,” said Dave Tuck, a Weeks engineer and assistant project manager for the three new tugs. The vessels have stainless-steel piping, stacks and hand rails, and the piping is welded rather than threaded to cut down on leaks.

The model bow lugger and shallow-draft design is a Rodriguez specialty. The rudders are a fishtail design that the builder has been modifying to suit different boats and budgets over the years. Rodriguez said he offsets the rudders inboard, a configuration that allows them to capture 85 percent of the propeller thrust.

“Offsetting the rudders inboard enhances the (sideways) walking ability of the tug tremendously,” he said. Extending the leading edge of the rudders also contributes to what he called “a maximum-performing rudder design. After 43 years building boats, you learn a little bit about designing rudders.”

“The handling is outstanding,” Tuck said.

There is a Coastal Marine Equipment (CME) towing winch on the stern and a pair of NABRICO deck winches on the bow for facing up. The stern also has an anchor shoot with centerline roller. The fendering was provided by M&M Bumper Service of Bourg, La.

The 78-foot triple-screw dredge tender has greater tankage capacities and a larger CME towing winch than the smaller tugs, which will enable it to handle larger and longer tows. The vessel is slated for delivery in August.

Read this article in Professional Mariner.